I’m writing this from the relative comfort of eight weeks since this fateful day, from this safe distance I can reflect upon the events, and endeavour to share them with you.

It all started a few weeks before, I was in need of a holiday for I had a fresh new passport desperate to be used. I looked up some prices for nearby parkrun destinations, but Dublin was too expensive, and Paris even more so, but then I found a reasonably priced Flixbus from London to Düsseldorf (home of Volksgarten parkrun) the only slight catch was that it included a three hour stop over in the middle of the night in the City of Brussels.

So on the Friday morning I had to make my way down to that London, which was easy enough, and I even had time to tour the Tower of London before boarding my bus to Brussels. The bus was a little late into the Eurotunnel port, a fact the driver felt was entirely the passenger’s fault for dawdling at passport control, but we were soon in France and pushing on towards Belgium.

In Brussels I enjoyed the conveniences of their train station just before it closed for the night, and then waited patiently for my connecting bus to Düsseldorf, I waited patiently as its scheduled arrival time came and went, and less patiently for an hour after before I finally called up Flixbus to find out what was happening.

It turns out the bus had arrived on time, but Flixbus in their wisdom had chosen to display on it a different route number, and destination to the ones printed on my ticket. I was informed that Flixbus camouflaging their buses was my own fault, and there was nothing they could do to help me, other than suggesting that I buy another ticket for the next Flixbus to Düsseldorf in 23 hours time.

So there I was, stranded in Belgium, a heathen parkrun-less nation, at 3am on a Saturday morning. I did what anyone else would have done in that situation, I cursed and cried, but I was not quite ready to give up hope. There were no other buses to London or Germany that night, but still I did not give up hope. I checked the train times, for just £140 I could get a eurostar that would get me into Kings Cross for 0859, but I feared that giving myself 1 minute to jog to Highbury Fields might be a little too tight, and so I gave up hope.

I sent one of the saddest texts I’ve ever composed, “I’m not parkrunning and I’m going to max out my credit card to get home”, and started jogging (well it was a Saturday so I had to get a run in somewhere) across Brussels to the place where the Ouibuses to London depart. I got half-way there when I realised I had made an oversight, I knew I could not get to Germany or England by 9am, but what about France?

Neither Ouibus or Eurolines could get me there, but, there was a Flixbus leaving for Paris in just 40 minutes time, and it was due to arrive into Paris before 9am. Not much more before though, 0850 to be precise. Google said it would be a 12 minute uber ride from the bus station to parkrun de Montsouris. I did not like my odds, I did not even like my chances of getting back to the Flixbus stop in time, but what else did I have to lose?

I retraced my steps and somehow made the bus to Paris, if it was on-time, or even at the risk of pushing my luck early, I might just make it to a parkrun. Not wishing to spoil the story but it was not on time. The Flixbus, quite possibly the last Flixbus I will ever catch, pulled into Paris CDG after 8am, there was no way it would reach its final destination on time, however…

The airport and the parkrun were both on the same RER train line, so I jumped off the bus and headed straight to the station, ordered “une billet to univeritee siv ull play”, correctly guessed the correct platform and waited a long two minutes for the train. Once on the train I could finally relax a little, I had done everything with my power to get to a parkrun, now it was in the hands of the Gods of Public transport.

The train arrived at Cité Universitaire at about 0850, at last I was somewhere I recognised from my last run here 12 weeks before. I allowed myself to smile as I jogged around the park to the parkrun.

The last time I was at this parkrun I had enjoyed the après-parkrun at Café Le ChinChin, which had taken-over the entire morning, but this time I was not feeling quite so sociable, still I hung around the finish for a while chatting and photographing prosecco. 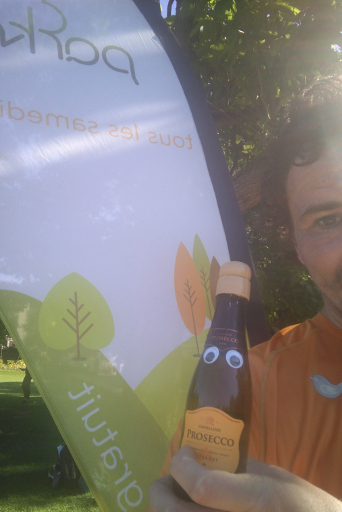 Now I had completed a parkrun, and traded being stranded in Brussels for being stranded in Paris, but I realy did need to find some way home. There was a Ouibus leaving Paris Bercy for London Victoria departing at 1100, so I set off walking to the bus station. I arrived at the bus station with just 6 minutes to spare, but I made it, I was heading back to Blighty.

I arrived into Victoria about 1915, where I was greeted by Chris McGurk. They insisted that even though I had not made it to Highbury Fields I should still enjoy a (somewhat delayed) après-parkrun so we paid a visit to the JDW The White Swan for some food and beverage. Eventually I found myself at Euston boarding a train homeward.