Hunting the Diamonds of Bedworth (16th of February 2019)

A few months back I was engaged in a facebook discussion about undocumented parkrun volunteer perks, such as the Run Director’s helicopter and the Ambassador’s five star retreat weekends, when I was told that at Bedworth parkrun “Token Sorters get a diamond encrusted chair in the cafe after their 10th volunteer”. Being a 3* star token sorter myself I was quite envious of this reward, and started negotiations about visiting their parkrun to do some token sorting. Having consulted my already quite full diary we settled upon the 16th of February, which was also the events first birthday so there would be cake.

My six o’clock alarm was followed by a train to New Street, a greggs breakfast, a train to Nuneaton, another train to Bedworth and then a short walk to the Miners Welfare Park, where I bumped into a bunch of Fetchies, and also some saddos from parkrun laughs.

Before the run started I managed to take a quick selfie with their selfie frame. 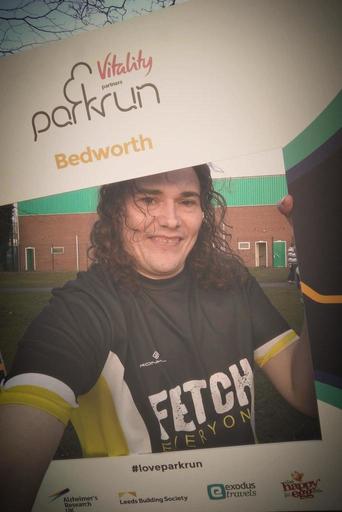 As they were having a pacing event, and I had successfully ignored the pleas to volunteer to pace 38 minutes I decided that my strategy was to (attempt to) keep in front of the 24 minute pacer. Somehow I managed it, completing the parkrun in 23‘24. I finished 42nd (my first time in that position) out of about 329.

Unfortunately the cafe was closed for refurbishment, so I did not get to use the diamond encrusted token sorter seat, instead I found a normal seat in the popup cafe, where armed with a cup of coffee I spent the best part of an hour socialising with saddos, sorting 328 tokens, and eating cake.